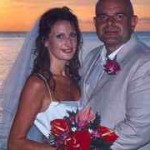 SHE enjoyed a life of the most vulgar excess, once joining her husband for a £600 chauffeur ride to Claridges for a £345 meal at Gordon Ramsay’s restaurant. But yesterday the glamorous wife of a Liverpool drugs baron was locked up for laundering his ill-gotten gains. Former beautician Sara Shea used her university-educated husband Keith’s drug money to pay for an enviable lifestyle of luxury.

He was locked up for 15 years in 2007 for plotting to flood the streets with cocaine, while storing a deadly arsenal of weapons.

The couple married in a lavish Barbados beach ceremony – spending £12,000 on flights alone – before throwing a £6,000 homecoming at Wirral’s Hillbark hotel. They splashed out £1,095 on dinner in the Oxo Tower – washed down with a £850 bottle of Cristal champagne. Their love of designer watches included an exclusive Chopard, a diamond-encrusted Chanel and his 18-carat gold Rolex. The latter cost £11,530.

Of course, no luxury lifestyle is complete without expensive cars.  The Sheas had their share of Porsches, before settling on the £110,000 Aston Martin police found when they raided their £300,000 Wallasey home, where the steam room had its own plasma TV. The Aston was accompanied by a £46,500 BMW and a £76,000 Porsche.

In just a year, the Sheas spent £90,000 in lavish entertainment, including £5,000 on hospitality at the British Open golf and £1,000 a time hiring a box at the MEN Arena. Mrs Shea owned handbags worth £12,000, with an account at Christian Dior’s boutique in Monaco.

Yesterday, smartly-dressed with sunglasses, and carrying a designer bag, she was jailed for 2½ years. Judge David Harris, QC, said: “There are other partners who may be in this position.

“The message has to go out that, if they meddle in the proceeds of crime, particularly drug crime, there will be serious repercussions for them.”

But Graham Pickavance, prosecuting, told the court the couple were stripped of £7,000 and 2000 euros at Liverpool’s John Lennon airport that was heavily contaminated with Class A drugs. Mrs Shea was carrying half the money, which they never tried to reclaim. The dark-haired 30-year-old, of Montpellier Court, Wallasey, later admitted she suspected their life-style was funded by crime.

She admitted 11 money laundering charges, totaling £104,000.
Jonathan Clarke, defending, told the court Sara Shea had inadvertently become involved because of her husband’s actions. He said: “It is an unusual case because this defendant has played no role whatsoever in the offences that lay in such funding coming into the household coffers.
“Her money laundering was simply spending the money she received from her husband, or being in possession of items he had bought. “She found herself there rather than seeking it.”

Mr Clarke told the court Shea, who is now dependant on beta blockers and sleeping tablets, had moved away from crime and had been working full-time in Debenhams. She had no wish to return to her husband.

Judge Harris agreed Sara Shea had “undoubted qualities”, but said she had led an “excessively luxurious lifestyle”. “You chose to turn a blind eye, to ask no questions and to shelter yourself from developing certain knowledge to the nature of his activity.”

Keith and Sara Shea will face a ‘proceeds of crime’ hearing on July 18.

Visit the BTC website for compliance help and support for firms in the regulated sector.